>Well, so much for that

Well, a lot of stuff happened. Like the end of tax season. This in itself tends to be a whole ball of crapola all wound up in a very short period of time. Except that this year, I had an extra complication:

Yeah, that’s my mom’s house, and that huge green thing is a tree. It’s a tree that my Dad planted. I used to jump over it when I played as a child, and he’d get all over me for doing it. On April 15, there was a huge storm, and the tree fell onto the house. All in all we were blessed; it nipped the corner where it could easily have gone smack into the middle of the house and basically destroyed it. Instead, there was a hole in the roof, three rafters broken and lots of cosmetic interior damage to my childhood bedroom. 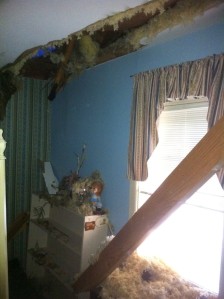 Mom was in the house when the tree fell, and she was understandably shaken up. I had been unable to get her on the phone for about half an hour, knowing she was home, and I had already gotten in the Hummer and was halfway there when Richard got the call from the neighbor that the tree had fallen. In case you’re wondering, I can now say with absolute certainty that an H3 will do speeds exceeding 90 in stormy conditions, although they do shake a lot when you get them up to that speed.

No power, no phone, no cable – Mom refused to leave. So Richard came up (Penny stayed home because insulation was everywhere) and we camped. I came back the next day and finished returns and extensions; the day after, power and phone was restored (kudos to Georgia Power and AT&T) and she finally got cable back the day after. But she lost the contents of two freezers due to the power outage – that was a lot of food to lose.

Repairs are underway. I’ll be really glad when they’re done, because it’s been difficult shuttling between here and there to supervise things.

The next thing that’s been keeping me amused is the committee looking for an interim minister at our church. I’m a member of the Presbyterian Church, USA, and if you know anything about Presbyterians, you know that we do everything “properly and in order”. In other words, we go around the world to get from point A to point B. It’s been a two-month long often frustrating process, but I’m hoping we’re about to draw it to a close.

And, to top it off, there’s going to be some changes with my business. I won’t go into them just yet… but everything will work out for the best.

I realized a few days ago just how long it had been since I’d done any stitching when I took out a piece to start and began treating overdyed cotton as if it were just plain DMC. I was completely mortified. Between work, looking after Mom, and church, there’s not been much time to do anything I like. I’ve been doing some fairly simple knitting, but not a lot. Evidently, this is a signal that something has to change. I’ve got to learn to take care of the caretaker. And somewhere along there, I’ll have to regain my sense of humor about a lot of stuff.

I did at least get two domain names reserved: www.doxietrek.com and www.baabaaknitstitch.com — I hope to move the blog to the latter one sometime in the near future, so keep a look out.

>Been a bit of a week

>Ponderings on Music and Me