>Well, we’ve had a little time to recover from the trip to Pigeon Forge. Penny has sufficiently recovered enough take over again. We didn’t think she’d want to go anywhere for awhile, but last Saturday she was stir crazy enough to want an outing, so we did the usual morning trip to Starbucks followed by errands. She made friends with a Papillon named Shiloh — Richard and I decided it was a tossup as to who had the cushier life, Penny or the Papillon — and she rode somewhat peacefully in her car seat while we drove her around. We were pretty happy about that, because that’s exactly what we want her to get used to doing.

I’m pleased to say that I have now survived my first colonoscopy. I knew it was important to have it done, because I’m at a slightly higher risk for colon cancer since I had an uncle die from it and since my father had a few issues… but to be honest, I put it off as long as I could. I’m here to tell you that the procedure itself is a piece of cake. You’re taking a nice, enforced nap (using Propofol in non Michael Jackson-esque quantities), and I figure as long as nothing ends up on You Tube, I’m good. My only problem was with the prep. If you have no clue what’s involved, I’ll let you google it. I knew it was going to be unpleasant, but I had no clue I was going to be one of the small percentage of people who had a really bad reaction to it. I’m such a speshul snowflake. 🙂 I got a clean bill of health tho, and they gave me an invitation to come back for another one in 5 years. I said we’d chat. Upon further review, I figure I’ve got no worries because the government healthcare probably won’t pay for it at that point anyway…

The new business is going well. You’d think things would settle down after tax season, but now we’re in what I like to call the “flurry of letters” season. My current favorite is the Georgia Department of Revenue, which apparently delights in wasting taxpayer time and money demanding payment of taxes that have already been paid. Topping that is the NC Department of Revenue which seizes bank accounts of unsuspecting taxpayers after sending notices to incorrect addresses, after they’ve been properly notified of the correct address. And some people think we only really work 4 months a year… 🙂

In the middle of all this, I have actually had an opportunity to (gasp!) knit and even crochet a little: 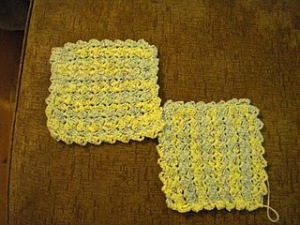 Crochet dishcloths, pattern is Tulip Stitch Dishcloth, yarn is I Love This Cotton by Hobby Lobby. You can get two cloths out of one skein. 🙂 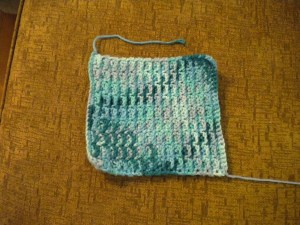 Ladder Stitch Crocheted Dishcloth, again in I Love This Cotton by Hobby Lobby. It took only part of a skein, so I’m doing another Tulip Stitch cloth out of the rest. 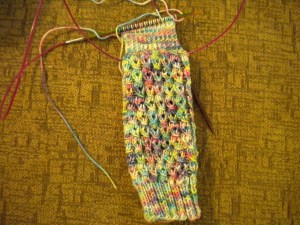 Hope you all have a great Memorial Day weekend! Take time during your fun to remember why the holiday is there, and if you see a soldier, say thank you. 🙂