>Thanks to all of you who actually read my last two posts. Looking back over them, they were so depressing that even I couldn’t stand reading them! So I’m starting off the year with a fresh outlook and have high hopes that I’ll be more entertaining.

So how about some pictures?? Say of a particularly cute wiener dog who just happened to get a package in the mail from her Uncle Jerry, Aunt Kay, and Cousin Clancy in Chicago??

The package was addressed to Penny, so it was only fair that she got first crack at opening it: 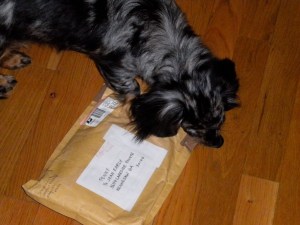 Unfortunately, the lack of opposable thumbs was ultimately her downfall. She gave it her best shot, but we had to help her. Inside, just for her were yummy, yummy, home baked dog cookies.

Now, I know this picture shows her sitting politely, waiting for a cookie. I fear it is seriously misleading, as she was quite excited and could barely wait to get to the yumminess that I was holding. Understand that Penny is, as all dachshunds appear to be, an odd little dog. When she gets a particularly high value treat that she thinks needs to be “buried” in our house, she’ll walk around with it in her mouth, crying. It sounds quite pitiful and it was very distressing the first few times we heard it until we figured out it was just her way. She took the cookie, cried, buried it, unburied it, walked and cried again, buried it, unburied it, walked and cried again… well you get the idea. This went on for quite awhile until she finally brought it to us for “permission” to eat. Silly dog. Needless to say, the cookies are such high value that I’m doling them out slowly… And we give a great big Thank You to our Chicago friends!!!

Penny has now decided that she wants to claim my pillow at night to sleep on. Mind you, there is an entire king-sized bed that she pretty much has the run of (can I end any more phrases with prepositions?), but she has a dachshund-obsession with my pillow. A couple of nights ago it landed her in her crate to sleep — now her crate is large and has a fluffy dog bed in it, so it’s hardly a prison, but it’s not with us. So we’ll say that it’s a problem we’re working on.

A little knitting, you say? Well, I did finish Christmas gifts for my sisters-in-law that can now be shown: 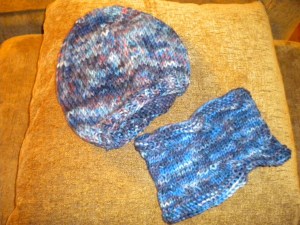 Identical hats and cowls, made from Araucania Chunky wool, ordered from Webs. Cowl pattern is the Un-Purled Cables cowl created by my friend Sara, and the hat is a beret recipe from Crazy Aunt Purl. Both are free patterns on Ravelry. I thought both of my sisters-in-law could use them since they have dogs that need walking during the winter weather.

Other pics? Well, I never posted the pic of the crew at ASG:

From L to R you find moi, Ann, The Magic That Is Heather, Teresa (girlwithneedles for all you Ravelry folks), Jill, Joy, and Angela. Our group was a little smaller this year, but we still had loads of fun.

That’s all for now… back to work with me tomorrow. Richard has been on vacation for two weeks and it’s been wonderful having him home. Although, it’s been a bit of a working vacation as we’ve been trying to evict the slobs who evidently moved into our house without us knowing it. We couldn’t possibly be that messy, could we?? In the process I ordered a grown-up desk for my office to be delivered this week and I’m very excited about that. (“If you get excited about a desk and a calculator, you might be an accountant.”) So until next time… 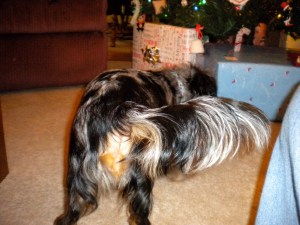 >The End of Another Year