>No… I haven’t fallen off the face of the earth. It just seems that way for those of you who have been waiting for me to actually write something on the blog rather than just post survey results. 🙂 As I said before, life’s been… interesting. Not a lot that I can actually go into here, but suffice it to say it’s a combo of clients, church, family and stuff in general. Nothing major, but just a lot of little stuff.

When last we visited, I was about to head out in the Party Van(tm) for Hilton Head and A Stitchers Gathering. For an excellent review of the classes we took, I’ll refer you to DF Teresa’s blog. The event was held at the Marriott resort, and the folks there couldn’t have been more friendly and accomodating. The weather, unfortunately, didn’t cooperate: it rained cats and dogs on Friday when we were there, so that pretty much curtailed any outdoor activity, especially since in the evening there were gale force winds, and those and the Party Van(tm) didn’t mix too well.

But, on Saturday between classes, we were able to take a brief walk on the beach: 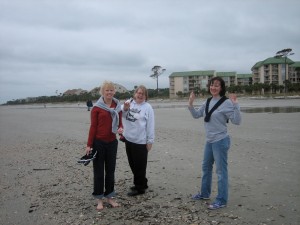 (That would be DFs Jill, Ann and Heather proving we were actually at the seashore. Note that Jill was the only one actually experiencing sand between her toes).

Highlight of Saturday evening had to be the costume party. Teresa and I had been planning for months to go as “pit lizards” — those ladies who stalk pit road at NASCAR races in hopes of snagging a husband/driver/baby daddy. Our costumes were well planned: 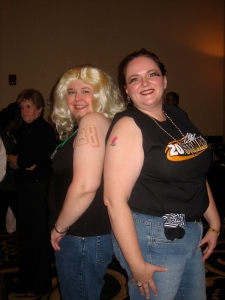 (For those of you not accustomed to seeing me as a blonde, I’m on the left.) The mismatched 8s are a henna tattoo that is actually still fading and are the work of a still slightly perplexed Indian shopkeep in Town Center Mall. DF Andy went with me and did an excellent job of explaining to him how the tattoo should look (we had also brought pictures), and he was game for the whole thing. I tipped him well. 🙂 What you can’t see in this picture is the 5″ heels I’m standing on. Richard and I went into the local Shoe Carnival and when this nice young man came up and asked if he could help us, I replied that I needed some “cheap ho shoes”. After he stood up from being doubled over from laughing, he helped me find these lemon-drop yellow numbers that were leftover from summer. I’m still amazed that I remained upright on them.

Of course, while the classes and food and such at ASG are great, this is the real reason I go: 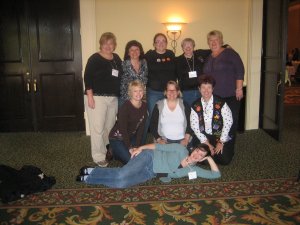 On the back row are Debbie B, Vicky, Teresa, moi, and Joy. Front row are Jill, Ann, and Angela. The “come hither” pose in the front is The Magic That is Heather.

The most kewl thing about ASG is that, were it not for it, I wouldn’t even know Jill, Ann, Angela, Joy, Teresa, Heather, and DF Judy. They’re now some of my best friends. Isn’t it amazing how sometimes very unexpected goodies come into your life?

>Now *this* is a horror movie