>Ah yes… spring has sprung. Love is in the air. Waterfowl are gettin’ busy. So far we’ve seen two families of goslings on our lake. One won’t let me get near them. Silly geese — I’m bringing saltines! The other one… well, the parents hiss a bit, and honk a little, but you can tell they’re just phoning it in. Mostly they hiss when they want me to throw them another cracker. 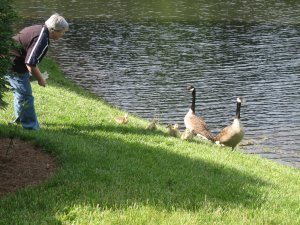 Me convincing the geese that it’s ok and I have crackers. They’re wary; I don’t blame them. They need to have a healthy fear of people. There are a total of 6 goslings. They are soooooo cute when they peep. I wish I could record the sweet little sounds they make so you could hear them. They just make me melt all over. (as an aside… seriously, am I that white-headed???) 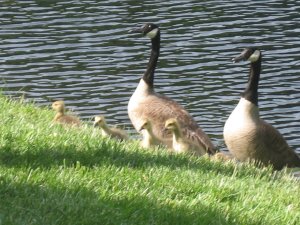 A closer look at mama and papa goose and their babies. How cute are they!!! I talk to them while I’m feeding them to reassure the parents that we have the same goal: making sure those babies have full bellies! 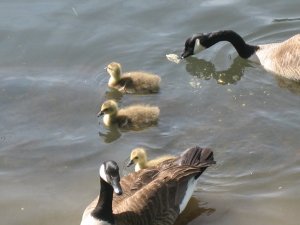 Before I talked ’em up on the shore, I threw a few crackers in the water. I’m always amazed that these little guys are hatched out swimming. I know that’s God’s plan for them; He didn’t have the same one for me, considering I never learned to swim and I sink like a brick. That’s why He made life jackets and gave me enough sense to stay away from the deep end. 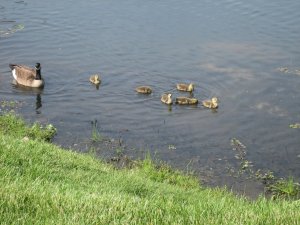 Here I think you can see all six babies. Sooooo cute!

I wish I had a picture from the day after these were taken when the geese were up on the bank. I crunched up some crackers — the goslings can’t handle a whole cracker yet — and one of them just laid down in the pile of crunched up crackers to eat his fill. Just made me want to pick him up and love on him, but I know that would not have been the best idea on earth. Plus Oscar was jealous enough (he was with Richard at a respectful distance while Richard was taking these pics).

What else have I been up to?? Spending some time in Rome with Mom, who continues to improve after the Ugly Drug Mixup. She’s busy planting her garden on the deck. When it starts growing up, I’ll try to post some pictures — it’s really amazing how many veggies she can grow there! I’ve been busy knitting socks for Warm Woolies as part of my Guilty Pleasures/Good Karma swap on Ravelry. I was very excited to win the Dancing With the Stars pool on Ravelry — I had the good fortune to draw Kristi Yamaguchi — and as my prize people are sending me skeins of Cascade 220 so I can continue the sock knitting for Warm Woolies. Good cause, and the socks make good traveling projects.

Got to take another class with Cat Bordhi at The Whole Nine Yarns. As you may recall I took her class in November, but I decided to re-take it because the subject matter was so complex, and November wasn’t the best time for me since it was before my shoulder surgery. I’m glad I made that decision, because Cat had re-worked how she was teaching the class, and her presentation of some of the concepts were different and a bit easier to master. It was an enjoyable day because the class was good and I got to hang with my buddies up at the yarn shop.

In the meantime, I took a private crochet class with Caryn at TWNY and I am in the process of learning to make amigurumi — those disgustingly cute little crochet toys. I’ve almost finished my first one and will post a pic here when it’s done. 🙂

So, it’s the Memorial Day weekend — the unofficial beginning of summer. While you’re out having fun and griping about the gas prices, take a moment to remember those who gave their lives so that we can have the freedom to have fun and gripe about the gas prices. Sometimes the reason for a lot of the holidays we have gets lost in the hoopla surrounding them, right??

>No actual children were harmed