>…For an itty bitty person who’s coming into the world soon. Charlie’s scheduled to arrive on October 19 (coincidentally Richard’s birthday), the much anticipated second child of Dan and Amanda at church, so I thought a little cardi was just the ticket: 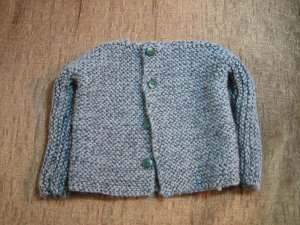 Richard admits that he’s a guy, and even he thinks it’s cute. Pattern is amazingly simple and available online for a reasonable cost. I did have some tres cute sheepie buttons to put on it, but Mom said (and I reluctantly agreed) that they were too large for the sweater. I’ll keep ’em in the stash because you never know when some sheepie buttons will come in handy.

On another note, I went to the doc this week to get a referral back to my orthopaedist. Some of you know that I had rotator cuff surgery done on my left shoulder four years ago. It’s due to a problem with misshapen shoulder blades that I was born with; the blades come down in a point that eventually rips into the rotator cuff. Evidently the right side has decided to get in on the act, and there’s a good chance I’m going to have to have that repair done before the end of the year and the beginning of tax season. That’ll put a hitch in my knitting and stitching plans for a few weeks, fer sure. So I decided I needed a little treat:

This is an itty bitty 8GB iPod Nano. It’s very cute, and it’ll be great to take with me to ASG so I can listen to music and my annoying podcasts on the airplane without bothering people. I also downloaded a pattern today to knit the Nano its own little sock. 🙂

>Why I Love Needlecraft Corner