>Those of you who know me know that I refer to myself as “home-economically-challenged”: that is to say, I’m not really at home in the kitchen. Unfortunately, when I do decide to try to cook something, I have this annoying habit of picking something that’s not the easiest for a beginner. It’s the same way I approached piano lessons as a child. I’d get a piano book and immediately turn to the back and learn to play the last piece in it. Then I figured I was done. The other piddly stuff in there was bor-ing. So we’ll say that working up to a skill set is not my strong suit.

I found a recipe for sea salt caramels. Looked good. Looked reasonable. I assembled ingredients: cream, butter, sugar, Karo syrup, vanilla extract and sea salt. Check. Recipe called for a large stock pot and a candy thermometer. I grabbed the largest pot I had out of my cookware set and broke the seal on the candy thermometer package and went to mixin’.

Cook for 10 minutes on high heat and bring to a boil while stirring to melt butter and dissolve sugar. Check.

Except…well… nobody told me what happens when cream, sugar, butter, and corn syrup start simmering. Things expand. In spite of every blasted chemistry and physics class I’ve ever taken, this thought never occured to me.

And when Mt. Vesuvius blew up all over the stove, I realized their definition of “large stock pot” was “bigger than the pot I had”. Exhibit A: 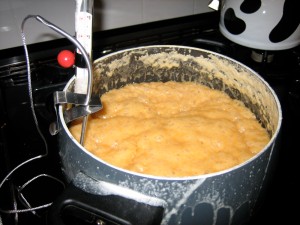 Note the caramelly goodness all over the sides? Yeah. Mt. Vesuvius erupted. We grabbed the pot off the burner and tried to get things calmed down.

So I think… well, I’ll keep a better eye on it next time… so I put it back on. Alas, I’m a slow learner. The same bloody thing happened again. Exhibit B:

See Richard’s hand cleaning up caramelly goodness from the eye of the stove? At this point, I fear we’re going to have to call in someone to repair the stove as that particular eye will no longer light of its own volition. Exhibit C: 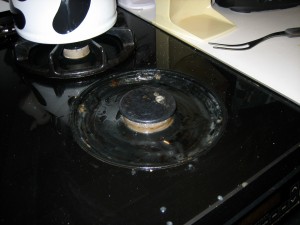 I like to call Exhibit C the “cha-ching for the stove repair people shot”. Note that this shot was taken in mid-cleanup. Caramel makes very quickly when the mixture lands on a hot stove-eye (just in case you were wondering).

So we figured that the volume of the goop we were working with was greater than the volume of the container, and we’d better take some out if this experiment was ever going to succeed. Richard diligently ladled out caramel mixture, and we resumed simmering for what seemed like an eternity at that point.

But the temperature finally reached the magic 248 and we poured the mixture out onto well greased parchment paper and left it to set. I had no idea what it would taste like, considering all the consternation, but actually, it’s some pretty tasty caramel.

It oughta be. I have a feeling it’s gonna be some very expensive caramel when everything’s said and done!

>Is this really necessary?