>What was that Thomas Wolfe said? Something about not being able to go home again? Today, for awhile at least, I tried.

Many of you know that I went to a private high school in Rome, Darlington School. Darlington is a well known prep school in the southeast with a long and proud tradition. I’m proud of my Darlington education; I think back fondly of my time there and I’m thankful to the teachers who took an interest in me and encouraged me to do my best. With only 110 people in my graduating class, it wasn’t the kind of place where you get lost. When I take people there, they can’t believe it’s a high school; it looks like a small college campus. Richard and I got married in the chapel there, because the first time I set foot in it, I said that if I ever got married, it was going to be there. The place is that important to me.

However, before I hit the Darlington campus in fall of 1973, I spent four years at a girls school across town known as Thornwood. I’ll let you link to the web page to get the history of the place; it is quite a fascinating story, as in 1958 folks in Rome decided that women needed an equivalent opportunity for private education as the men had had at Darlington (which had been all male until fall of 1973). So from the 6th grade through the 9th grade, I attended Thornwood. The boys and girls schools merged in 1973, and Darlington was the surviving entity. Thornwood became the newly formed Lower School, with Pre-K through 5th grade invading the antebellum house we had previously called our school.

Today Thornwood celebrated the 50th anniversary of the founding of the school, and all the “Thornwood ladies” who had ever attended were invited back along with faculty and staff who had worked there. I decided, with some trepidation, to attend. You see, when I was an adolescent, I was a pretty grim, pimply faced, nerdy little girl. Seriously. Those of you who know me today wouldn’t recognize me. But then, I fear I was a bit of a target, considering teenage girls can be rather cruel. So some of my memories of Thornwood weren’t exactly pleasant… as a matter of fact I think the merger with Darlington was probably one of the best things to happen to me, as I was able to make *friends* with *boys*. I got along much better with them than many of the girls with whom I had previously been in school. One other benefit was that our grades weren’t as segregated as they had been, and I got to make friends with girls who were either older or younger than I was.

But I wanted to see how they had remodeled the house…. see if there was any sign of the ghost who used to live there (or if the little buggars had scared it off), and I wanted to show Richard that part of my life that he’d heard me talk about.

And it turns out, I had a better time than I thought. I was able to see my French teacher, Mrs. James, and wish her a hearty “Bonjour!” and let her know that because of her capable teaching I was able to skip several quarters of French in college. I saw Mrs. Berry, my 6th grade English teacher, who had my class for two hours a day for a year (and I can’t even begin to imagine the trauma my class must have caused her… some folks had some behavior issues), and I got to thank her for the good foundation in grammar that all that sentence diagramming has had to this day. I got to see Mr. Kirkpatrick, who was the headmaster, who probably didn’t remember me, but as I said to Mom, I didn’t spend as much time in his office as a lot of other people did…. and that was a good thing.

We spent the day with my friend Karen and her mother, Mrs. Candler, who was my biology teacher. Mrs. Candler’s not doing well these days, but I think she enjoyed coming, and it was great to see how many of the girls remembered her fondly and came to tell her so. Karen was a year ahead of me but is only a month older… one of the quirks of having a January birthday meant I was really a lot older than most people in my class. (Came in handy when I got my driver’s license first!) Karen’s birthday is in December, and in Georgia, December 31 was the cutoff for school, so she got to go into school at a younger age. At any rate, we were good friends once we got together after the schools merged; we were in each other’s weddings, and we’ve kept in touch on and off over the years. It was really good to see her again and be able to talk.

There was a luncheon in the gym. At that point, it became apparent that the day was to be geared toward the girls who had actually graduated from Thornwood. There were tables for all the classes from 1962 to 1973. Then there was an unidentified table for the rest of us who had technically graduated from Darlington but happened to attend school at Thornwood for awhile. That’s ok. It really wasn’t our time, after all…. it was theirs. And while Thornwood was a stopover for me, it wasn’t my “home” — Darlington was.

I did get to see a couple of people from my class that I hadn’t seen in awhile. It was nice to spend a few minutes catching up.

Only one pic from the event… it was the memory I wanted to take with me: 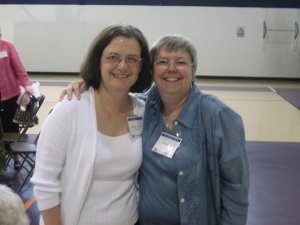 Me and Karen — we’re a little older and a little greyer (or at least I am), but what’s important hasn’t changed.

Oh… and I didn’t see the ghost. But then, they still wouldn’t let us in the attic of the house either.

>The Good, and the Not so Good