>The Verdict and The Vacation

>The Verdict is in from the Magic Man Dr. Lowery…. he reviewed the results of the arthrogram and the MRI (by the way, if you’ve never enjoyed large needles being inserted into your shoulder while you’re awake….well… I don’t really recommend it), and evidently I really did it up this time. While I had suspected there was a rotator cuff tear, I didn’t think it was as bad as it turned out to be. So, the Magic Man will fix it on December 13. He says he’ll probably have to anchor it down to the bone due to the extent of the tear, altho he won’t know for sure till he gets in there, and if that’s the case, I’ll be in a sling for 5 weeks after the surgery. Definitely on injured reserve as far as stitching and knitting goes. With, may I add, the extra bonus of turning 50 in a sling in January.

Oh well….. at least it’s something that can be fixed. And after a small pity party, I’m counting my blessings. There’s a lot of folks in a lot worse shape than I’m in. So I just learn to work and blog one handed for awhile. Frustrating, but do-able. 🙂

So we went up to Rome the day before Thanksgiving to have a big dinner cooked by my mom, and on Thanksgiving day we headed for Pigeon Forge, TN for a couple of days of vacation. If you’re not familiar with Pigeon Forge, it used to be a bump in the road on the way to Gatlinburg, which was the area tourist trap. Then Dolly Parton decided to develop the area, and now it’s an unbelievable mix of shows, goofy golf, and outlet shopping.

We were there for hard core shopping on Black Friday. Altho the outlets opened at midnight, we decided to forego that and started our day around 5:30 AM. Certain members of our party weren’t exactly thrilled: 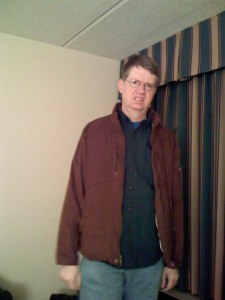 Richard and Oscar had other ideas of ways to spend their morning…. namely sleeping, but good sports that they are (well, they really had no choice in the matter), they bundled up and got out in the cold with us to go shopping. And it was cold. And windy. And crowded. Tons of people were out there. Evidently folks had started lining up waaaay before midnight when the outlets opened. 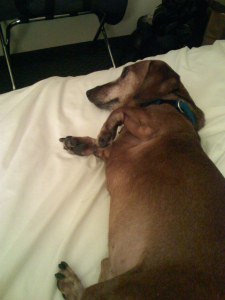 We bundled up Oscar in his stroller (or as Jill refers to it, “his royal carriage”), but as it turns out, he wasn’t the only dachshund in a stroller there. There was a wiener dog summit in the Polo outlet when we met a 3 year old black & tan who was making his first-ever outing in his new stroller. Evidently this little guy wasn’t as easy going as Oscar, because he actually *barked* at Oscar. And we heard that there was a Pekinese in a stroller around the outlets, but we didn’t actually encounter him.

To give you an idea of how crowded the town was, I snapped this picture of traffic out the window of the van: 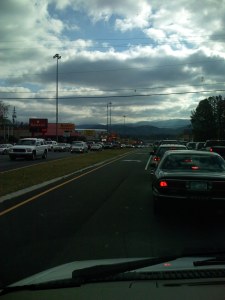 (I tried to get a picture of my mom, but she threatened me in a tone I haven’t heard since I was a little girl if I took her picture, so I didn’t.)

We ended up shopping from about 7 (after all, we had to have breakfast and get all ready to go out, then actually fight traffic over to the outlets) until about 6 on Friday, and we were all pooped puppies. Headed back home on Saturday. A short trip, but just long enough.

Richard and I did actual Christmas shopping for his family on Sunday afternoon after church. We were surprised to see that the mall wasn’t that crowded. Maybe everyone got it out of their system on Friday. 🙂

I hope everyone had a great Thanksgiving! We’re just not going to talk about the Tech-Georgia game, ok???

Comments on: ">The Verdict and The Vacation" (2)